IAS 36 ‘Impairment of Assets’ sets out the requirements to follow prior to concluding if and when an asset should be impaired. However, due to the complex nature of the Standard, the requirements of IAS 36 can be challenging to apply in practice.

The articles in our ‘Insights into IAS 36’ series have been written to assist preparers of financial statements and those charged with the governance of reporting entities understand the requirements set out in IAS 36, and revisit some areas where confusion has been seen in practice.

Indicators for reversing an impairment loss

In addition to assessing evidence of possible impairment, entities must also assess whether there is any indication a previously recognised impairment loss for an asset (other than goodwill) no longer exists or the assessed impairment amount may have decreased. If an indication of possible reversal is identified, the entity must estimate the recoverable amount of that asset.

Similar to the list provided in IAS 36 indicating when there might be an impairment loss, the Standard also provides a nonexhaustive list of circumstances when a previously recognised impairment loss may no longer exist. These are summarised below.

Most of the ‘reversal indicators’ listed are the inverse of the loss indicators listed in IAS 36 (discussed in ‘Insights into IAS 36 – If and when to test for impairment’); there are however some exceptions to this. In particular, an increase in market capitalisation above carrying value of an entity’s net assets is not listed as a reversal indicator.

Reversing impairment losses for individual assets (other than goodwill)

For assets accounted for using the revaluation model in IAS 16 ‘Property, Plant and Equipment’ or IAS 38, the reversal of the impairment loss is accounted for in the same way as a revaluation increase in accordance with those standards.

The diagram below depicts the requirements for reversals of impairment losses for individual assets and the following example illustrates their practical application. 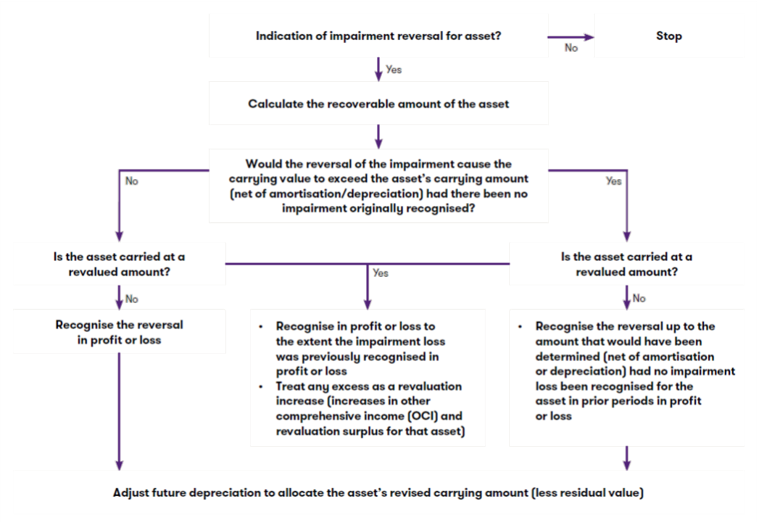 Any reversal of an impairment loss for a cash-generating unit (CGU) must be allocated to the individual assets that make up the CGU (excluding goodwill). The entity is required to allocate the reversal of an impairment loss to the CGU’s assets pro rata to their carrying amounts. This is again however subject to a ‘ceiling’ whereby no individual asset’s carrying amount is increased above the lower of:

If this ‘ceiling’ takes effect for one or more of the CGU’s assets, the reversal of the impairment loss that would otherwise have been allocated to those assets is allocated on a pro rata basis to the other assets, subject to the same ceiling.

The below flowchart depicts the allocation process. 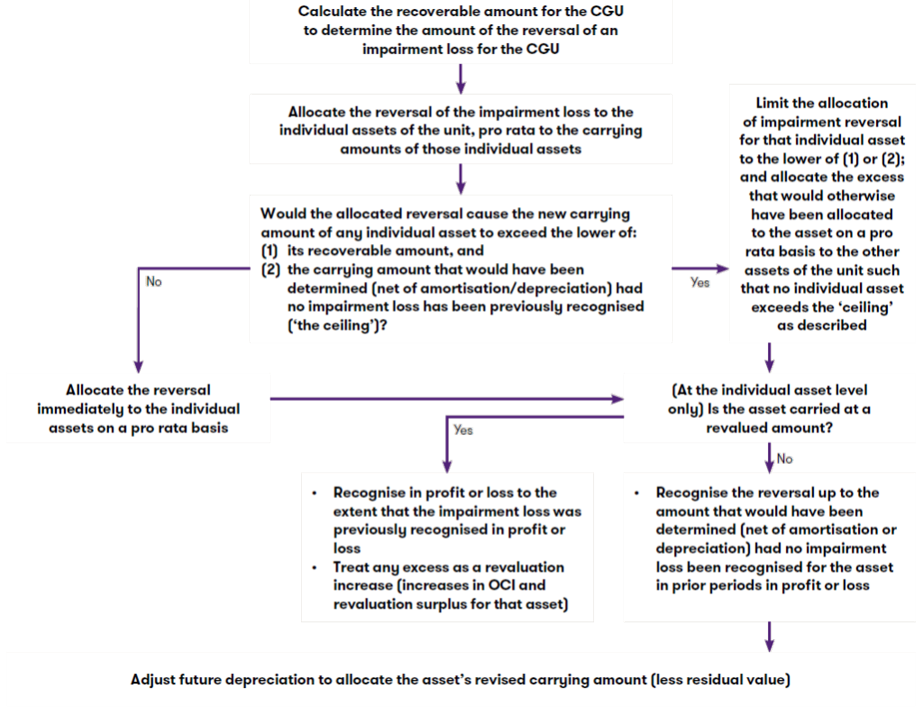 Download the full Reversing impairment losses article for an example of reversing a previously recognised impairment loss for an individual asset and an example that illustrates the practical application of the requirements.

How we can help

We hope you find the information in this article helpful in giving you some insight into IAS 36. If you would like to discuss any of the points raised, please speak to your usual Grant Thornton contact our related expert.